[Day 23.  Start of Book 2 of the adventure path, which is spent planning the first expedition and interviewing potential wizard hirelings.]

[SPOILERS!  If you are likely to adventure through the Shattered Star Adventure Path from Paizo, this campaign will be spoilers all the way down.]

Not Appearing This Week

The Ratpack found themselves sitting in Heidmarch Manor, the Pathfinder Society lodge in Magnimar.  They were planning their next steps.  The next shard of the Shattered Star artifact was located in the vicinity of the Lady’s Light, a 200-foot tall statue located on the end of a peninsula in the south-westernmost reaches of Varisia's Mushfens, approximately 50 miles from the city of Magnimar as the crow flies.  The enormous statue was of the Rune Lord of Lust and the light it supported acted as a lighthouse for shipping in the area.  In attendance were Roscuro, Zitch, Templeton, and Winston.  Marativy was independently investigating the kidnapping of Frederick, the Ratpack’s patron [and occasional fence I suspect].

The Ratpack did research in the Pathfinder Society’s library and found some minimal information about the Lady’s Light and the peninsula it is on, including a rough map of the peninsula.  Travel time to the peninsula varied based on means of travel: walking through the Mushfens would take 4 days [plus dealing with troglodytes and boggarts], using a small boat to navigate the rivers there would take 6 days due to the indirect path [plus dealing with any hostiles on the way], but passage on a ship heading there would only take half a day to get to a safe drop off point and then another day of walking to get to the actual site.

The best plan seemed to be to hire a ship to get there, row some boats to get the site, camp there for a week, and then return.  The amount of supplies would be manageable and the group would not have to hire a lot of porters or multiple boats.  The Ratpack presented this plan to Venture-Captain Sheila to see if they had missed anything.  She recommended that the group speak with Sabriyya Kalmeralm, head of a Magnimar merchant house and friendly with the Society.  Sheila further suggested the group speak with the artist Ayavah, who has an interest in things the group may find under the Lady’s Light.  With much to accomplish, the Ratpack split up to work on the different things that need doing.  They agreed to meet again at the Blue Rodent each evening to report and make adjustments to their preparations if necessary.

Templeton went to meet with the artist Ayavah to see if he could get her to finance the expedition or at least to find out what the Ratpack should bring back to her for purchase.  Ayavah was known around Magnimar for carving risqué statues, most recently of entwined succubi, that were small but very detailed.  Templeton located her residence in The Harpy, one of the pillars of the Irespan [distressingly close to the “shit house” where the Ratpack secured their first shard – see Shattered Star, Book 1, Session 9 ].  Templeton, in his foo-dog form, presented himself as a minion of others to Ayavah.  When he mentioned that the group was going to explore the Lady’s Light, Ayavah became very interested.  Very interested.  She stated she was interested in any statuary of Sorshen, the Runelord of Lust, and would pay very well for them or any other related statuary.  To seal the deal, she gave Templeton a magic coin for his “masters”.  This turned out to be a Whispering Coin.  After speaking with Ayavah, Templeton caught up with Winston and the two spent the rest of the week crafting alchemist fire and tanglefoot bags.

Roscuro secured a table at The Staff and The Book, a tavern in the Dockway district, to work out the logistics of the expedition and interview wizards for hire.  [Roscuro had been seeding any magic schools or academies with hiring ads for the last week.]  Roscuro planned for the expedition to take a day to get to the Lady’s Light, a week searching for an entrance to whatever dungeon was there, and then a day to get back to Magnimar with whatever treasure they could find.  If he purchased two weeks of supplies, that would be enough for the expedition and walking back to Magnimar if something went wrong with the ship.  He wanted a cook for the expedition as he was not certain any of the Ratpack could actually prepare food and he wanted to get real food and not iron rations.  To keep the cook safe, two bodyguards needed to be hired.  This worked out to a cost of 140 gp for food, water, and hirelings.

Roscuro ended up interviewing four actual wizards [which included two sorcerers] over the week and several more fake wizards looking for an easy gig.  The fake wizards made excuses to leave once they learned the job was going out into the Mushfens and not to become a “house wizard”.

The most potent of the wizards Roscuro interviewed was Swamprover, a grippli wizard dressed as a swashbuckler with large floppy hat [well, large for a grippli] and a rapier.  Roscuro was dubious at first, not certain at first if the talking frog-person was a wizard or a familiar, but Swamprover cast several spells during the interview and was able to make her sword fly across the room to the dartboard and then return to her hand.  She also spoke Thassilonian and Boggart [not that Roscuro could verify this and he only speaks two languages: Common and Bad Common].  Roscuro thought she would make a good addition to the Ratpack and asked her to return [he needed permission to bring her in for a full share]. 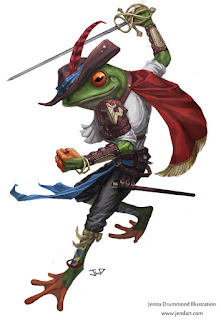 Swamprover [Not Shown: Tiny snake familiar, Snek]
Source: "Grippli Fencer" by Jenna Drummond Illustration at jendart.com
NOTE: The Pinterest version of this art removed the artists signature - Shame On Them!

The two sorcerers were Zel’jka, a half-orc woman with a fey bloodline specializing in enchantment magic, and Vanran "Van" Greyward, a halfling woman with a shadow bloodline.  Both had skill [were third level each], but they were both attempting to avoid trouble, rather than enthusiastically join an expedition.  Instead of offering them positions, Roscuro put them in contact with each other and provided both with a letter of introduction to the Tower Girls, now headquartered in the siege tower one day away from Magnimar, and a map of how to get there.  He felt they might fit in better there.

He also interviewed Gridik Stormstride, a blue kobold evoker.  Despite being a novice [first level], Gridik was able to cast multiple force bolts and Magic Missile twice a day, something Roscuro thought would be very handy.  Gridik also spoke a wide selection of languages, including Thassilonian and Ancient Osiriani.  Roscuro wanted Gridik on the expedition but wasn’t certain whether to offer a share or a flat rate.  As Gridik was not part of the local wizard guild [hence his need for work], they settled on a fee of 25 gp per day for a minimum of nine days, 25 gp up front.  That would pay Gridik 225 gp for the expedition, which might beat a full share if the group did not find much on the first expedition, but Roscuro had confidence that the group would find much to sell from a Thassilonian-era dungeon. 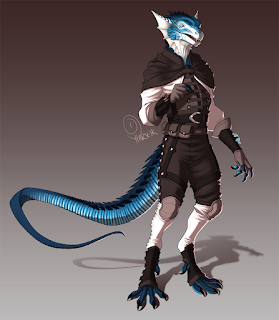 [My notes don’t say what Zitch was up to during this week, so I’m leaving a placeholder here for him until the player tells me.]

After conferring with the rest of the Ratpack, Roscuro offered Swamprover a place on the team for a full share of whatever the expedition realizes.  She accepted the deal [and a new PC joined the group].

Roscuro located and hired a cook for the expedition and two guards to keep an eye on the camp and the cook while the Ratpack delved the dungeon.  The cook was a halfling culinary expert named Mel.  The two bodyguards were a halfling and a gnome set of warriors named Flo’ and Alice.  They knew Mel and had worked together before, which seemed ideal to Roscuro.  They will each be paid 3 sp per day to stay in camp.  Roscuro is willing to pay hazard money to Flo’ and Alice is anything attacks the camp.

Roscuro spent the day purchasing and arranging delivery of supplies for the expedition.  This included 14 days worth of real food for 10 people, 3 large tents, cooking gear [pots, pans, and portable cooking surfaces] for Mel, and some other miscellaneous gear.

[So we’ve resumed the Shattered Star Adventure Path for reasons explained elsewhere.  As a result of the Delvers Guild campaign, we picked up a player we didn’t have in Book 1 of the adventure path.  We needed a straight up wizard, so this worked out well.  The Other GM started Swamprover at 4th level as that is the official starting level for Book 2 of the adventure path.  There was some discussion about that, but that was the Other GMs ruling, so we abide.]

[The majority of this session was remembering where we were and what we’d been doing, followed by planning our expedition with the limited information we had available.  The Other GM provided a map of the peninsula for us to peruse.]

[I plan on Roscuro taking the Leadership feat as soon as he qualifies and taking on Gridik as his Cohort.  I built Gridik and Van a couple days before the game session so the Other GM had NPCs available for Roscuro’s hiring campaign.  It had the benefits of providing potential hirelings with the skills and abilities we wanted/needed and saved the Other GM some work.  Roscuro was specifically looking for low-level casters so I made them the lowest level I could and still meet our requirements, which were: A) had darkvision, B) were a wizard or sorcerer, and C) were preferably under 4 ft in height.]

Session 2 [Not Yet Typed Up]

PatrickW
Houston, Texas, United States
I'm a tech writer by trade, an editor by disposition, and a project manager by employment.

What This Is About

I'm using this blog to chronicle the campaigns I am either running or playing in and occasionally posting things I'm writing. I wrote two drafts of a sci-fi novel and journaled that effort. Recently I wrote a draft of my own OD&D clone, Adventures in the Green. See the Downloads section below for the link to the draft rules booklets.

This is a list of the things I'm sharing from various personal projects. Enjoy!

Wars! - The rules for Greyhawk Wars! edited to be readable and playable.

The Game
Draft rules and the recreated map for the in-house game GDW used to bridge the timeline from Twilight 2000 to Traveller 2300/2300 AD.
The Rules
The Map

The links here lead to campaign archives - pages providing links to the session notes I've written for the various games I've been involved in. This should make it easier to find the material deep in the regular archive widget, which is organized by date.
The Pleiades Group (Shadowrun 5th Edition)
The Aldelle Group (Pathfinder 1.0)
Book 1: Dyson's Delve
Intermezzo
Book 2: The Gate Saga
The Delvers Guild (HERO System 5E)
Creature Catalog
[I'll add more to this as I have time.]

This is a convenient collection of my postings related to my Hero Traveller campaign.