[The campaign resumes with some accounting and the purchase of a guildhall.]

[This game uses the Fifth Revised Edition of the Hero System rules along with the Fantasy Hero supplement.  This session happened October 14, 2019 August 3, 2020.]

Jala – human female – a person of discretion, studying aspects of the Law [to avoid them] at the Dusk Academy

Ricky the Astrologer – human male – has a thirst for knowledge but doesn’t know what he’s searching for, currently studying Astrology at Monarch University

Nick Stalwart – human male – part of the Stalwart family of merchants, studying Mathematics at The Interesting Institute of Profitable People, a college at Monarch University

Sunday, October 27th, 1st year of the reign of King Vladik the Gamesman

The Senior Membership of the Delvers Guild [the player characters] met at their favorite drinking establishment, The Library, for the weekly Senior Management meeting.  Their second order of business [the first being the attainment of drinks] was to discuss their business for the week.  Nick and Vorgand were to go over to Ferragus the antique buyer after the guild meeting and sell off the four chairs recovered from the moon during last week's expedition.  They were also to sell the jewelry box taken from the pyramid crypt at the ancient elven graveyard.  They would go to other vendors to sell off various other valuables and magic items the guild had marked for sale [Arrow of Rage and Bracers of Archery].

Vorgand reported she had selected three buildings as candidates for purchase as a guildhall for the Delvers Guild.  As they were in three different parts of Aegea City, it would be best to go look at them the next day as a group, especially as she and Nick would be dealing with Ferragus this afternoon.  With the sale of the chairs and other items, the guild would have the funds to purchase any one of the three buildings.  The Senior Membership agreed to go look at the buildings the next day and then return to The Library to discuss them.

The meeting adjourned for lunch and afternoon classes.

Nick and Vorgand arrived at the establishment of Ferragus.  Ferragus, a thin human in his late 40’s, greeted them warmly.  One of the elven chairs on wheels the Guild had brought in the previous week was on prominent display in the shop.  The three exchanged greetings and then got to business.  Nick and Vorgand explained they had four more chairs to sell that were in better condition than the previous 12, choosing not to explain why and Ferragus chose not to ask.  They asked if Ferragus was still interested buying.  Ferragus was very willing to buy the four new chairs as there was a good market for them.  Nick explained the chairs were still in Little Wytheford and asked if Ferragus could pick them up there.  Ferragus explained he could, but it would mean he needed an additional 15% of the sell value to cover expenses.  Nick knew this was a reasonable percentage, if slightly high, and told Ferragus that he and Vorgand would deliver them in a week.  Ferragus agreed to this and said he would start shopping the chairs around verbally.

After dealing with the chairs, Nick asked if Ferragus might also be interested in a jewelry box of elven manufacture, even though he normally dealt in furniture.  Ferragus was intrigued and answered that it would depend on the box.  Nick produced the jewelry box and Ferragus’ eyebrows went up into his hairline.

Ferragus put on some soft gloves and then asked to hold the jewelry box for a better look.  Nick handed it over to Ferragus, who pulled a jeweler’s loupe out of a pocket to examine the jewelry box in detail.  Ferragus stated that it was likely a grave goods box of very old design, but in excellent condition.  Vorgand volunteered that she had been told it was related to an elf known as Jack the One-Eyed.

Ferragus froze for a full second.

He then looked at the details and designs on the jewelry box more closely.  Then he glanced around his shop to verify they were alone before whispering to Nick and Vorgand.  Ferragus told them he could probably get them [an amount where their share would be 200 gold coins] for the box, but they could get much, much more if they sold it in one of the elven realms.  The elves would have some very…pointed… questions about how humans had got ahold of the box, but the payoff would be high.  If they were able to leave again.

Nick and Vorgand told Ferragus they’d rather sell it here in Aegea City as the closest elven realm was more than a month away by sea and land.  [That and they did not want to admit they had raided an ancient elven graveyard to get it, especially to elves.]  Ferragus understood and told them he would handle the transaction.  It would take a week, maybe two to sell, but he knew buyers would be very interested in it.  They spent the next 30 minutes filling out contracts and sipping wine before Nick and Vorgand left Ferragus’ shop.

Moonday, October 28th, 1st year of the reign of King Vladik the Gamesman

The Senior Membership of the Delvers Guild met at The Library and had a quick lunch before going as a group to investigate the potential guildhalls.

Location A: The Townhouse 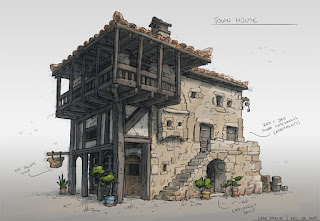 [01-stone-town-house-concept-environment, by Gabe Kralik, found on Artstation.com, used without permission]

Location A was a stone townhouse near Hart Gate, on Sanguine Lane, the main thoroughfare from the stockyards and butchers district.  It was sturdy but small, with each floor a separate area.  The townhouse was on the corner of a courtyard and the street and had a lot of traffic going by it.  The third-floor balcony was a nice touch, but not the tower that Ricky asked for.  The building would also be tight on space.  That said, if it was not chosen as the guildhall, several members considered purchasing it as a personal residence.

Location B: The Gatehouse 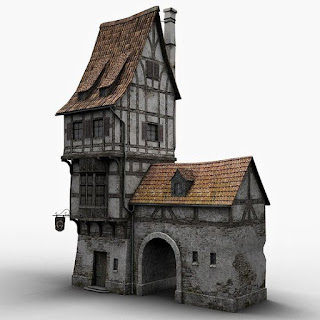 Location B was in Old Town, near the bend in Potemkin Street.  It was once a gatehouse long, long ago when Old Town was new.  The arched passage provides access to a courtyard beyond and is the public access to the shops facing that courtyard.  Several guildmembers were not keen on the public access arch and that the common room had no side rooms (being all of the second floor), but were otherwise impressed by this location.  Ricky stated it was tall enough that even without a tower, it would meet his needs. 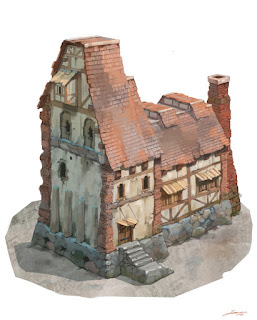 [Stone Village-house2, by sungwhooan-lee, found on ArtStation.com, used without permission]

Location C was in the Student Housing district.  It was once a small warehouse and has been abandoned for years.  Students periodically break in and hold parties or meetings here that are not approved by the University.  It is quite likely that one of the Delvers Guild had attended a party here once.  The guild liked this location.  It was big and roomy if somewhat decrepit and a known party location, which was seen as an advantage.  The guild would be able to raise funds by renting parts out for parties.  Additionally, it already had a basement and the upper floors met Ricky’s requirements for a tower.

The Senior Membership of the Delvers Guild met back at The Library for dinner and to discuss their options over drinks.  After talking it over and a quick vote, Location C was selected as the new guildhall.  Nick and Vorgand would spend the next couple of days getting the purchase handled.  It would take some time to get it done, but the Delvers Guild would have a guildhall.

[So the “short intermission” of “4-6 weeks” while we played through Book 1 of the Shattered Star AP ended up being 10 months in length, but we all had fun.  While I did not get everything mapped out for this campaign like I wanted, I got time off as the GM that I needed.  I wrapped up work on a rewrite of GDW’s The Game (available for free as The Houston Protocols in the Downloads sidebar), I wrote an OD&D clone set of rules (Adventures in the Green, Draft B is currently available for free in the Downloads sidebar), and a global pandemic started (I had nothing to do with that).]

[We are all excited to return to the Delvers Guild campaign.  At least partly because of the game system (HERO System, 5th Edition) and partly because of things going on in the game.  This campaign will run until the in-game school season ends and adventuring season resumes at Barrowmaze or the PCs fully explore Moon Base: Turm, whichever comes first.  At their current rate of exploration, they are likely to explore the moon base well before the end of spring classes.  Perhaps the winter weather will change that...]

PatrickW
I'm a tech writer by trade and an editor by disposition.

What This Is About

I'm using this blog to chronicle the campaigns I am either running or playing in and occasionally posting things I'm writing. I wrote two drafts of a sci-fi novel and journaled that effort. Recently I wrote my own OD&D clone, Adventures in the Green. See the Downloads section below for the link to the rules booklets.

This is a list of the things I'm sharing from various personal projects. Enjoy!

Wars! - The rules for Greyhawk Wars! edited to be readable

The Game
Draft rules and the recreated map for the in-house game GDW used to bridge the timeline from Twilight 2000 to Traveller 2300/2300 AD.
The Rules
The Map

The links here lead to campaign archives - pages providing links to the session notes I've written for the various games I've been involved in. This should make it easier to find the material deep in the regular archive widget, which is organized by date.
The Pleiades Group (Shadowrun 5th Edition)
The Aldelle Group (Pathfinder 1.0)
Book 1: Dyson's Delve
Intermezzo
Book 2: The Gate Saga
[I'll add more to this as I have time.]

This is a convenient collection of my postings related to my Hero Traveller campaign.